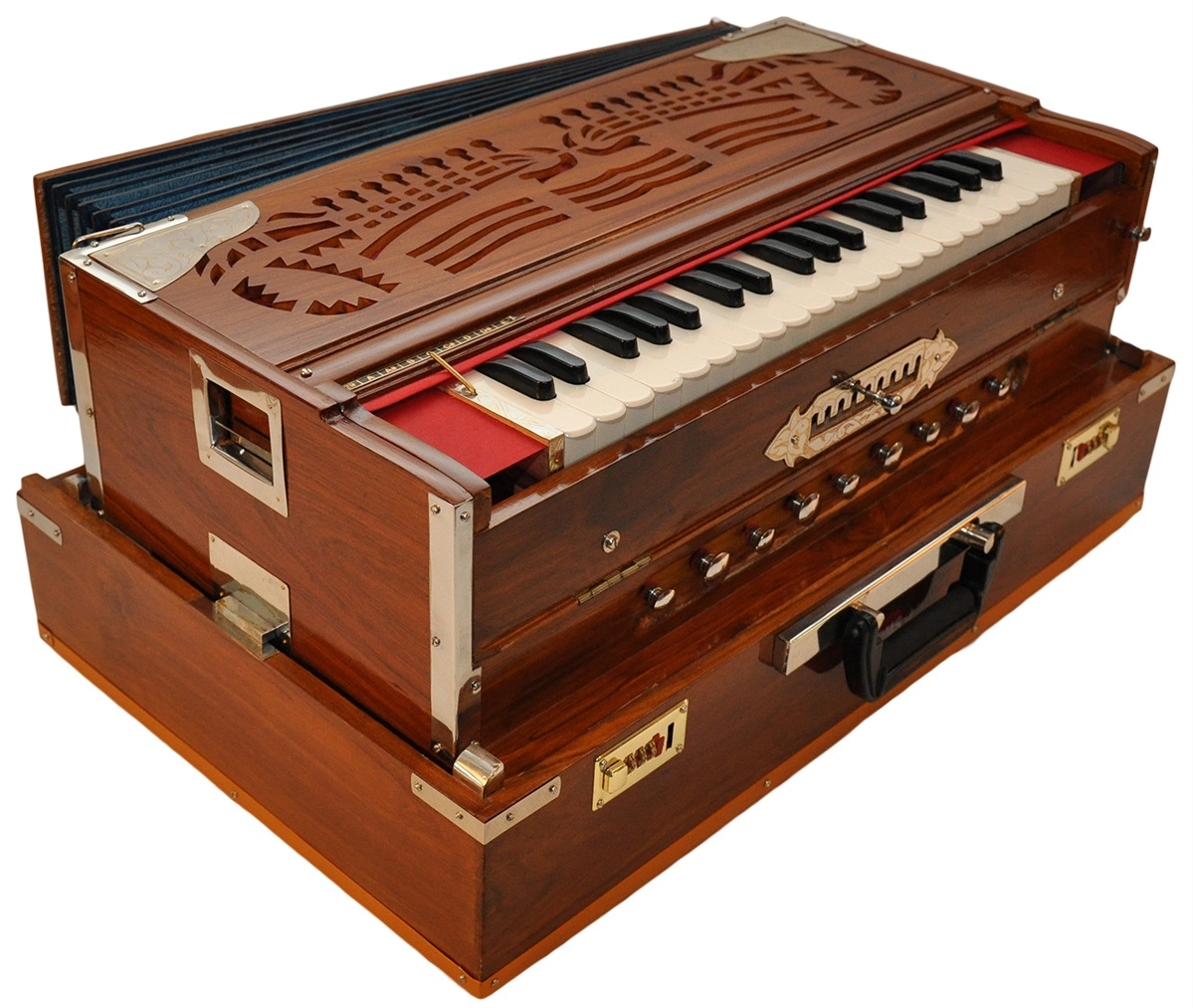 Harmonium is a keyboard instrument which is similar to a reed organ. It was initially invented in England in 1840 and then it gained popularity all over the world. It is considered as a bi-cultural instrument since as keyboards have European origin but drones are Indian. Harmonium can either be foot-pumped or hand-pumped both which are available in Europe but in India, only the hand-pumped version is available. That’s why, it is also known as one of the hand-pumped instruments in India. It is a small sized instrument that can be easily placed on a table and consists of two types of bellows and a keyboard. One hand is used for bellows and other one to play a keyboard. The bellows are external as well as internal. External bellows are played with hands and helps in pushing air inside and internal bellows act as a container of air.

The piano is an acoustic, stringed musical instrument invented around the year 1700 (the exact year is uncertain), in which the strings are struck by hammers. It is played using a keyboard, which is a row of keys (small levers) that the performer presses down or strikes with the fingers and thumbs of both hands to cause the hammers to strike the strings. The standard piano of today has 88 keys, the three foot pedals also has specific functions. The pedal on the right is called a damper, stepping on this causes all the keys to vibrate or sustain. Stepping on the pedal in the middle causes only the keys currently pressed to vibrate. Stepping on the pedal on the left creates a muted sound; a single note is produced from 2 or three piano strings that are tuned in unison. 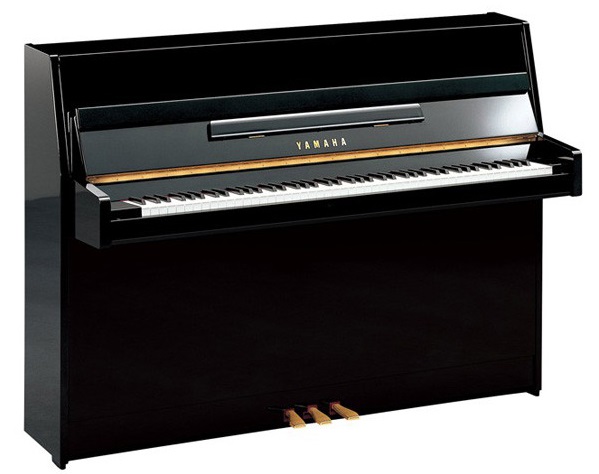 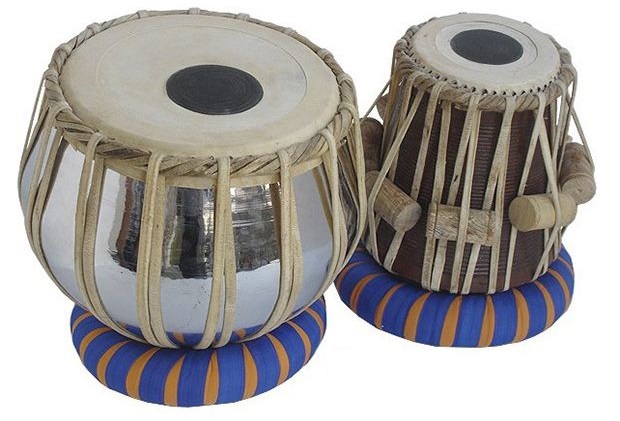 The tabla is actually two drums played by the same performer. Both drums have compound skins onto which a tuning paste, or siyahi, is added to help generate the wide variety of tones these drums can produce. The bayan is the larger of the two drums and is generally made of metal or pottery. The siyahi on the bayan is off-center, which allows the performer to add variable pressure on the skin, changing the pitch of the instrument with the palm of his or her hand while striking it with the fingertips. The smaller drum is called the dahini, or sometimes referred to as the tabla. Dahini are usually made of heavy lathe-turned rosewood and provide much higher pitch sounds than does the bayan.

Dholak is a South Asian barrel-shaped, two-headed hand drum made of one piece of wood. It is also popularly known as dholki. Its construction is very simple. It may either have traditional lacing or turnbuckle tuning. In Traditional lacing(rope-tuned), Steel rings are used for tuning and pegs are twisted inside the laces. In Turnbuckle tuning(bolt-tuned), nuts and bolts help in producing tension. The two heads of a dholak vary in sizes with right one being smaller in size. The right head has a simpler membrane and produces a high pitched sound. The left head is relatively bigger in size and contains special coating (a mixture of sand, tar, and clay also popularly known as the dholak masala) on its inner side.This coating not only helps in lowering the pitch but also helps in fine-tuning of the same. 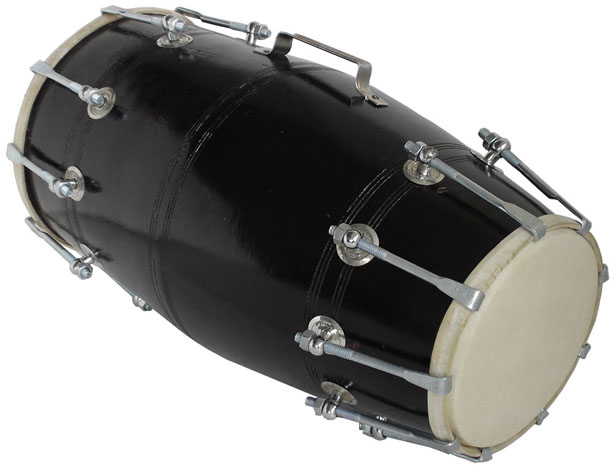 A mandolin is a musical instrument in the lute family and is usually plucked with a plectrum or "pick". It commonly has four courses of doubled metal strings tuned in unison (8 strings), although five (10 strings) and six (12 strings) course versions also exist. The courses are normally tuned in a succession of perfect fifths.
It is the soprano member of a family that includes the mandola, octave mandolin, mandocello and mandobass.

Flute is a simple cylindrical tube of uniform bore and associated with Indian music since time immemorial. Flutes vary in size. Flute is held horizontally and is inclined downwards when it is played. To produce sound or melody one has to cover the finger holes with the fingers of the left and right hand. Variations in pitch are produced by altering the effective length of the air column. A indian flute is traditionally made from a single hollow shaft of bamboo with six or eight finger holes. The six hole instrument covers two and a half octaves of music. The flute is typically between 30 centimetres (12 in) and 75 centimetres (30 in) in length, and the thickness of a human thumb. One end is closed, and few centimeters from the closed end is its blow hole. Longer Flutes feature deeper tones and lower pitches. 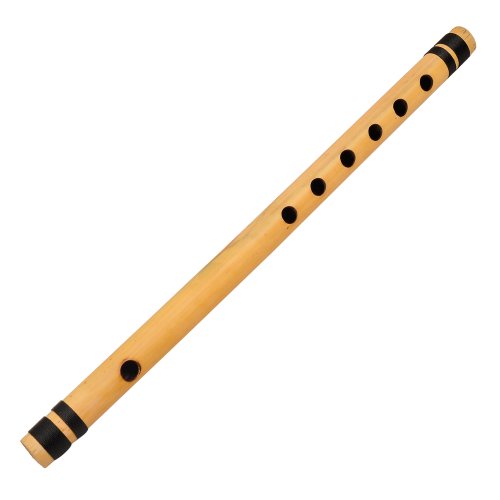 Bharatnatyam is an attempt to embody the divine beauty, rhythms and symbols that exist in the universe.  It is a means of spiritual elevation both for the dancer and the audience.The name Bharatanatyam some believe, is meant to signify Bhartha (the author of the Natya Shastra, a famous 2000 year old Indian treatise on the performing arts, encompassing theater, dance and music) and natya (Sanskrit for the art of sacred dance-drama brought to the stage).

The term 'Kathak' has been derived form the Sanskrit word 'Katha', which means a story. The classical Indian dance form of Kathak originated in the northern regions of the country and is narrative in nature. Fast footwork (tatkar), spins (chakkar) and innovative use of bhav in abhinaya characterize Kathak. Kathak, as it is practiced today, was affected by the mythological narratives by kathakas, temple dances, the bhakti movement and even Persian influence of the Mughal courts.

Kuchipudi, a pre-eminent Indian classical dance form counted among ten leading classical dance forms of India, is a dance-drama performance art that originated in a village of Krishna district of Andhra Pradesh, India. Similar to all leading Indian classical dance forms, Kuchipudi too evolved as a religious art rooting back to the age-old Hindu Sanskrit text ‘Natya Shastra’ and connects traditionally with temples, spiritual faiths and travelling bards. This ancient dance form finds place in the 10th century copper inscriptions and in 15th century texts like ‘Machupalli Kaifat’. Usually performance repertoire of Kuchipudi that is broadly oriented on Lord Krishna and the tradition of Vaishnavism include an invocation, dharavu – short dance, nritta – pure dance and nritya – expressive dance respectively.

"God has given you the ears to enjoy the music of his rhytms & that you can only feel when you become a realised soul..."
Shri Mataji Nirmala Devi